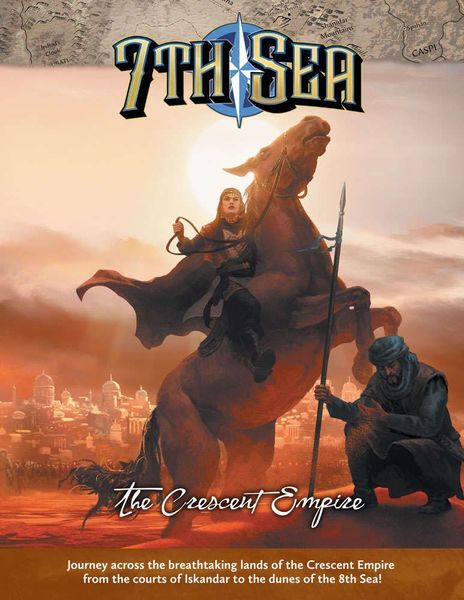 In an ancient land of sand and sun
Those who burn brightest cast the longest shadows.

When the rightful empress returned home to reclaim her throne, the empire rejoiced. As the empire awakens to a new dawn, Anatoli merchants to Sarmion nobles work towards a new life, holding close the ideals which make the empire strong—family, honor and kindness.

However, progress is not made without pebbles in the sand. The dethroned sultan plots to recover his throne and his lover, controlled by an otherworldly force, seeks to aid him. Jinn have awoken hungering for the power over mortals they had many years ago...


• Anatol Ayh, the seat of power and shining star of the Crescent Empire
• Ashur, an independent city state run by both Assassins and pacifists
• Persis, ruled by a cruel shah whose vendetta against the empress may tear his country apart
• Sarmion, a proud Nation rebuilding after the most recent Numanari attack
• The 8th Sea, a vast desert filled with proud tribes and ancient beasts


Will the empire fall under these threats? Join the fight for the empire’s bright new destiny!

Welcome to the Crescent Empire, a land of myth and might, where rivalries of faith, family, and politics constantly threaten the fragile bonds between kingdoms.