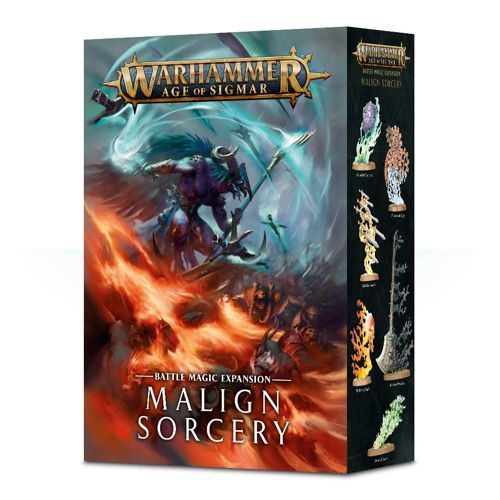 Contained within the box:

– Magic in the Mortal Realms: a history of magic in the Mortal Realms, tracing the origins of sorcery back to the Age of Myth and presenting detailed information on the differing specialisations of various races, and the magics of the Eight Realms. – The Learning of Magic: all sorcerers face the same dangers when bending wild powers to their will the forces Order, Death, Destruction and Chaos deal with these dangers in their own manners, detailed here; – Concerning Realmstone: this mysterious substance contains enough power to annihilate cities here is detailed the different realmstones which can be found across the Eight Realms; – Descriptions of 13 manifestations that herald a new era of magic, which will soon be seen of every battlefield in the Mortal Realms; – A showcase of the miniatures found in the box, including step-by-step guides and descriptions of effective painting techniques.

Rules expanding the use of magic in games of Warhammer Age of Sigmar make up the second section of the book:

– Endless Spells: these are the rules for using the miniatures included with Malign Sorcery, magical constructs which remain in play until dispelled or out of bounds. This includes 5 Narrative Battleplans designed for use with this set; – Skirmish on the Realms Edge: the wild magics unleashed by the necroquake grow wilder the closer to the borders between realms an army finds itself these are rules for fighting skirmishes right where the sorcery is at its strongest. Includes Command Traits, Artefacts, and Leader Spells, Rewards of Battle and Edge of Aqshy scenery rules (for games set within that Realm). Also includes a Skirmish battleplan specifically designed for use with this set; – Paths to Glory at the Realms Edge: rules for playing a Path to Glory campaign under the conditions at a realms edge, including Followers Rewards Table and Champions Rewards Table. Also includes 2 Paths to Glory battleplans specifically designed for use with this set; – Spells of the Realms: 7 sets of spells for use with the Realm of Battle rules from the Warhammer Age of Sigmar Core Book; – Artefacts of the Realms: Artefacts of Power, weapons and relics divided between different Mortal Realms for use in games; – 2 Pitched Battle battleplans specifically designed for use with this set; – Pitched Battle profiles for the Endless Spells, including minimum and maximum unit sizes, points, and battlefield role.

The box also includes 14 Endless Spell Warscroll cards these cover each of the miniatures described above with a 14th card covering rules for the Balewind Vortex, available separately. As an added bonus, the entire set comes in a sturdy box with a handle, making it easy to transport to and from games!