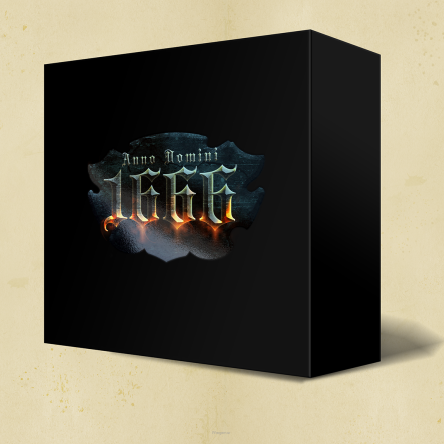 It is the year of our Lord 1666. Emperor Leopold is dead. The election looms. European monarchs send their envoys to Vienna to participate. But the struggle for the Empire's future takes place not only at the noble courts. In Vienna's slums and alleys swashbucklers, musketeers and thugs wage a secret war on behalf of their powerful superiors.

Anno Domini 1666 is a tactical adventure miniatures game in which two players pit their bands against each other in order to achieve specific goals defined by a scenario. The game takes place on boards depicting 17th-century Vienna with a grid overlay. Dice rolls are replaced by cards either played from a player's hand, or drawn blindly from a deck. A scenario's objectives may include defeating the opponents in combat, but also stealing a valuable object or breaking out a hostage, among others.

The theme and characters of the game are based on real-world history, historical novels (such as Three Musketeers) but also feature magic, alchemy, wizards and fantastical creatures. The participating factions are the Poles, the French, the Ottomans and the evil sect Broken Cross. They can get help from the Vienna locals (thugs, urchins, merchants) and famous mercenaries. The process of building a band is fast and streamlined thanks to a draft system.

The game’s Kickstarter campaign is scheduled for spring 2018.