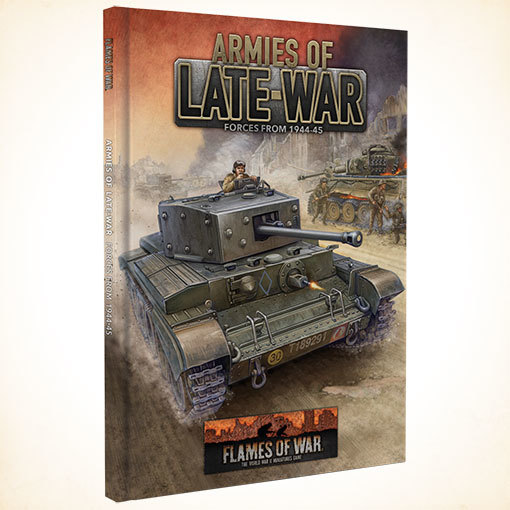 As 1944 began, the British and American forces in Great Britain were preparing for their return to France in the D‑Day landings. At the same time the Armies in Italy looked towards Rome, planning the battles that would capture the first Axis capital to fall in the war. While the Western Allies planned, the Red Army was fighting the brutal battles that would take them from Leningrad to the borders of Poland clearing the Motherland of the Fascist invaders.

Armies of Late-War contains the US, German, British, and Soviet forces involved in these dramatic campaigns to liberate Europe. These give you everything you need to field these forces in a Flames Of War game, including the up-gunned M4 Sherman (76mm) and Firefly VC tanks, the powerful M36 Jackson tank destroyer and Cromwell tank, the deadly Churchill Crocodile flame-tank, the M16 with its quadruple .50 cal machine-guns, the lethal Jagdpanther and Jagdtiger, the up-gunned T‑34/85 medium tank and the powerful IS-2 heavy tank with its 122mm gun capable of penetrating the armour of any tank.