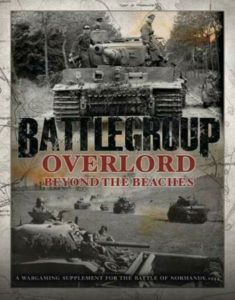 Battlegroup - Overlord: Beyond The Beaches

1944, NORMANDY... In the largest amphibious assault ever mounted, British and American forces had fought their way through the Atlantic Wall and into occupied France, to begin the liberation of western Europe from Nazism. Inland from the beaches, the Allies had to defeat the might of the German Army in a bitter three month battle through the fields and villages of Normandy.

BACKGROUND
A broad overview of the Battle for Normandy, across the British and American sectors, providing the background to your games.

GAME DATA
All the required data for Allied and German armoured vehicles, soft skinned vehicles, aircraft and guns for the Normandy campaign.