Legend of the Five Rings: Campaigns of Conquest 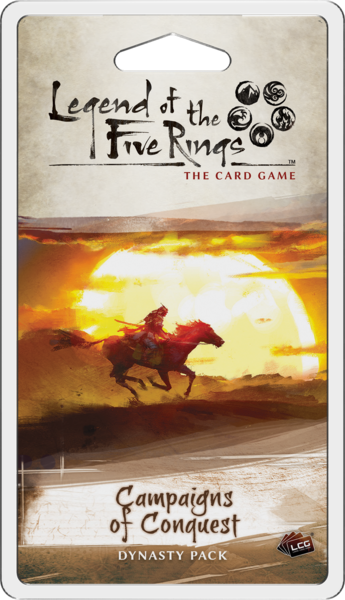 In the aftermath of the Emperor's death, the Great Clans of Rokugan scrabble for power. Some search for certainty amidst the storm, others use the chaos in the Imperial City to solidify their own base of power. The virtues of Bushidō have guided samurai from every clan through countless dangers, but the cracks in the Empire are beginning to show...

As the next piece of the Dominion cycle for Legend of the Five Rings: The Card Game, Campaigns of Conquest leans into the biggest themes of the cycle, boasting three dynasty deck events and nine cards with the new rally keyword. New cards for each of the seven Great Clans enhance their deck-building options, while a new Lion stronghold invites Lion Clan players to explore a new type of deck centered on your Bushi. Can you safeguard the future of the Emerald Empire and uphold your clan's honor?