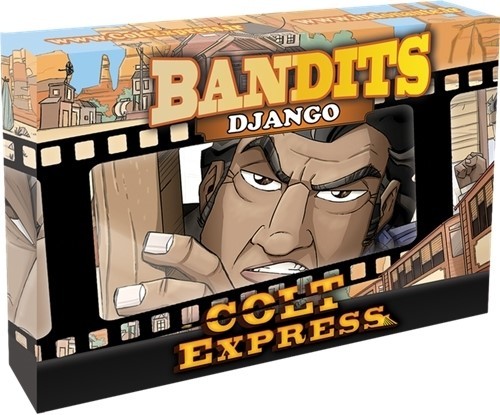 The principle of each one of these mini-expansions is to make the game play one Bandit.

A new story is told each time, since every expansion offers a specific purpose and new actions for the Bandit played by the game.

That Bandit may win, and in that case, all the players loose the game. Thus you need to work together against this bot. But do not forget that there is only one winner at the end: the richest Bandit, of course.

Each one of these expansions can be used with the base game Colt Express only. They are not compatible with each other, nor with any other expansions.

Django shoots everything in sight. He can target several Bandits at once, and then give several Bullets in one Fire.

Django has always had a soft spot for Dynamite. He erratically drops sticks of dynamite in Cars.

He is able to make them explode all at once. Thus all the Bandits who are in the wrong place at the wrong time are ejected.

If he succeeds in ejecting every Bandit from the train at least once, Django wins the game.