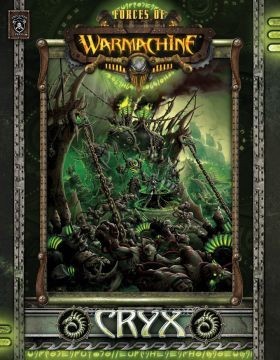 From the darkness of their nightmarish isle, the undead legions of Cryx strike forth at the Iron Kingdoms, each battle serving to fuel their unholy factories as necrotechs shape everything that walks, crawls, or slithers out of their dank, macabre workshops. To oppose Cryx is to oppose death itself as legions of undead mechanithralls, ghostly bane thralls, looming black iron helljacks, and skittering bonejacks surge forth at the command of their lich lord masters.

Serve the glorious Dragonfather and bend the power of death to your will with Forces of WARMACHINE: Cryx, featuring

- New troops to bring to the fight, plus the all-new warcaster Lich Lord Venethrax.

- An in-depth look at the history and structure of Cryx’s military.

- A painting and modelling guide to help you ready your forces for battle.

- Cryx Theme Force lists and rules, which allow you to create armies based on specialized forces from the Nightmare Empire of Cryx.

Let the Iron Kingdoms Fall by Your Hand!