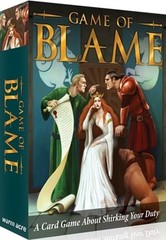 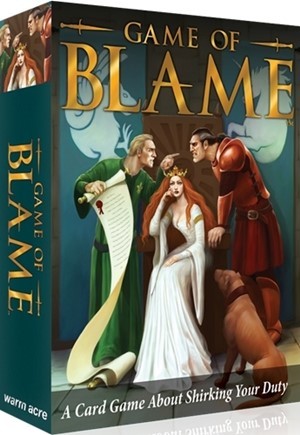 Experience the schemes and skulduggery of life at Medieval court in Game of Blame.

Take on one of six roles as a royal advisor and tell the Queen exactly why her Realm is on the brink of catastrophe. Accuse your colleagues, bury your secrets and dodge responsibility as the deck runs down and incriminating evidence mounts.

On your turn you play up to 3 cards to the blame pile. Each card played must share an emblem with the previous card (some cards have 2 emblems and either can be matched). In an ideal world, you want to utilise symbols that are not your own role as when it comes to apportioning blame (Accusation), the numbers of your cards vs the other person you have accused of being to blame will be counted.

Accusation is achieved by pointing your finger very vehemently at the accused player. Keeping a mental track of whats been played is therefore a really good strategy as looking through the pile is not allowed.

The player with the most of their own emblem in the pile takes the entire blame pile. However, you dont want those cards left in your hand at scoring either. All the other players not to blame may bury a secret and discard one card of their own blame type out of their hand permanently.

The game stops and is scored when the draw pile is exhausted.