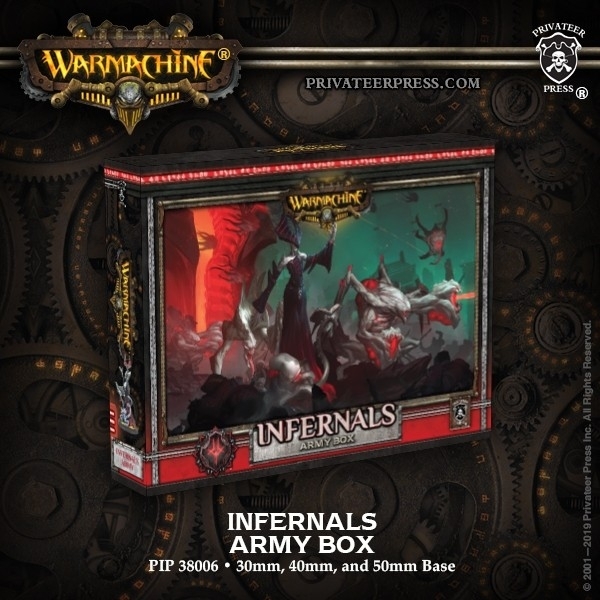 Open the Gates to Your Infernal Masters!

Composed of otherworldly horrors and soldiers drawn from the Outer Abyss, the invading infernals represent a threat on an unprecedented scale to the mortals of Caen. Joined in battle by cults of their infernalist collaborators, infernals are prepared to confront every faction in western Immoren, reaping the souls of the slain. Leading this force is Zaateroth, the Weaver of Shadows, a being of godlike power and authority within their hierarchy. She has summoned monstrous horrors of nightmarish proportions and unthinking ferocity to fight at her side, each a malevolent creature whose mere presence twists the minds of her adversaries before tearing them physically apart.

Take command of these insidious Infernals with this box, which contains a full army of horrors and infernalists ready to support your infernal master’s battlegroup.

The perfect start to an Infernal army, this box provides a complete army to begin playing immediately.

The Infernal Army box provides a complete 35-point army ready to play. Led by Zaateroth, the Weaver of Shadows this force cripples your opponent's army with a variety of debuffs such as Black Spot from Zaateroth, Soul Parasites from the Lamenter, and Withering Death from the Desolator. Grievers and Cultists make up the core of the army, with Grievers providing ranged weapons to harass your foe, and the Cultists can either provide backline support or Ambush, striking your foe from the side. Add Valin Hauke to provide more defensive abilities to your army, or a Soul Stalker to increase your melee damage and soul collection.