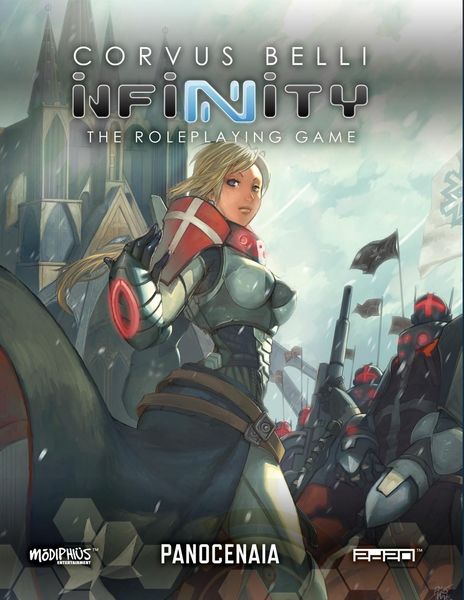 PanOceania. The Hyperpower. Life at the top of the G5 nations ensures a certain amount of privilege and power. It also brings its fair share of enemies. Born from an intercontinental alliance on Old Earth that pioneered the race to the stars, PanOceania has led the transhuman revolution without ever once looking back.

Stewards of no less than three entire star systems and numerous colonies on several other worlds, the Hyperpower is also the largest proponent of ALEPH, the benevolent AI that oversees many of the functions that allow the vast PanOceanian empire to operate. Overseen by ALEPH, their policies set by lobbies, and their faith guided by the Church, most PanOceanians soak up glamorous holovids depicting the herculean might of the latest cutting-edge TAGs or the glorious charge of power-armoured Knights and bask in the sanctity of their technological superiority.

Scratch beneath the surface of the neon and chrome, however, and all is not as harmonious as the Mayacasts would have you believe. On the ocean planet of Varuna, Libertos fight ever more violently to free themselves from a subversive occupation, whilst all across PanOceania’s territories, dispossessed Ateks struggle for recognition from an interstellar institution that refuses to acknowledge their existence. With new gear and fresh insights on the mightiest of Hyperpowers, this sourcebook will take you deep beneath the sparkling surface of PanOceania’s dazzling exterior.