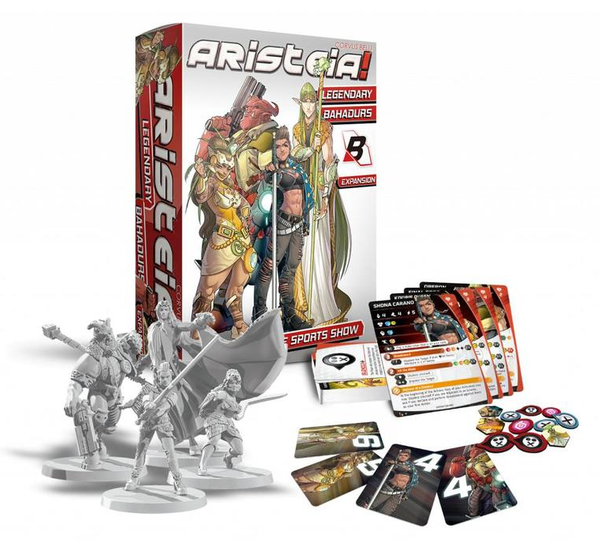 Legendary Bahadurs (LB), a new expansion for its game Aristeia!, which will expand the options available to players and the versatility of the games with four new characters, each one with a new playstyle. Legendary Bahadurs is not a complete game, you need a Aristeia! Core Box to play.

This expansion sees the return of four of the greatest Bahadurs "Aristeia Champions" to the HexaDome. The famous commentator of Vissiorama and five-time Bahadur, Final Boss, has decided to return to the competition by gathering a team of old companions. Shona Carano, a remarkable swordswoman; Koorie Queen, the very first Bahadur; and Oberon, a support geist.

Shona Carano's game role.
Shona Carano is a specialist in short-range combat, where she is quite lethal. It’s a profile that stands out in scenarios where there are character clusters, or it’s important to conquer and defend a Scoring Zone.
Some of her tactics have the ability to execute free actions.
Her Attributes are average, and her Defense is low, so she has to act quickly and take great care of Enemy Shooters.

Koorie Queen's game role.
She is a harasser specializing in the hunting and incapacitation of support characters, or characters with a low Hit Points value.
She makes use of the Hidden State only while performing Offensive Actions.
Her Bounce Ability is perfect to finish off injured Enemies. In addition, it imposes the IStunned State.
Koorie Queen’s Defense and her Agility, in combination with her Switch, make her very elusive.

Final Boss' game role.
This is a complete profile if there ever was one. Final Boss is an off-tank with stamina by virtue of his good Defense and his Automatic Ability i-Khol, with the ability to deal damage over a short range with his Attack.
He has great Brawn and Agility values which give him the ability to activate his Switch and impose the IStunned State within short Range.
You can impose the States Dazzled and -2U, which gives him a bit of control ability.

Oberon's game role.
Oberon is a support character that works with our Tactics deck, and imposes a new State in the game: Silenced. Taking into account the Mulligan at the start of the game, and the cards “I have a Plan” and “Catch your Breath”, it won’t be difficult to get the desired Tactics with Oberon on hand.
At the cost of discarding a Tactic, it offers the opportunity to add Yellow dice to any Roll of an Ally. This variant of Focused is extremely useful for anyone who uses "!".
As is standard with support characters, his Defense is weak and his Hit Points value make him a very fragile target.

The expansion introduces the Silenced State.