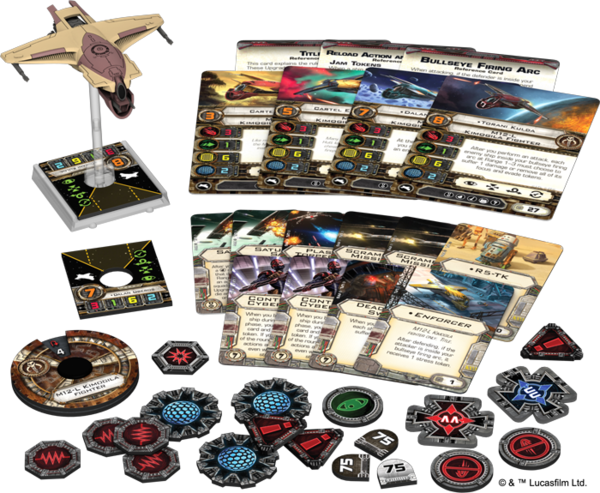 Produced by MandalMotors and flown by enforcers of the Hutt kajidics and other criminal cartels, the M12-L Kimogila fighter was dreaded by spacers across the Outer Rim for its ordnance capacity and the withering torrents of coordinated fire it could unleash. It was a blunt instrument, trading maneuverability for raw destructive power, but this was a trade that suited its pilots, many of whom were blunt instruments themselves.

Along with its pre-painted miniature, the M12-L Kimogila Fighter Expansion Pack brings this fearsome heavy fighter to life in X-Wing as a Scum and Villainy faction vessel with four ship cards and ten upgrades—all focused on catching your foes in your bullseye and pulling the trigger. This is a starfighter that wants to joust. The M12-L Kimogila fighter has a hard time turning sharply, especially in close-quarters, but it excels in the initial, head-on approach and engagement. Its shields and hull make it durable enough to withstand even the most devastating shots your opponent may fire in the initial pass. Then its primary attack value of "3," its ability to load and unleash missiles, and its new bullseye firing arc all combine to ensure your attacks will hit for maximum efficiency.