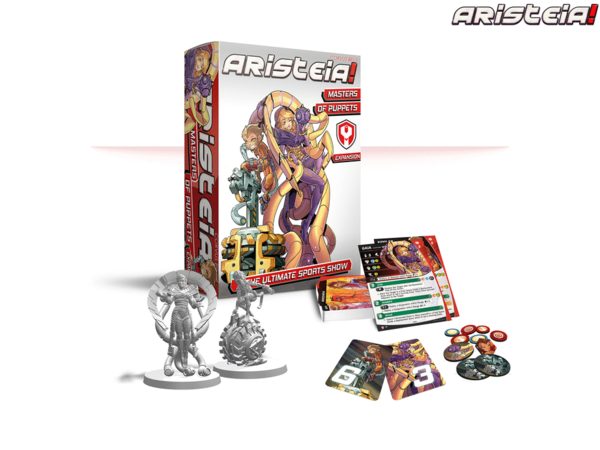 Fiddler and Gaia are two highly-skilled women with an amazing aptitude for cyber-electronics. Both had to give up to part of their lives to build a brand new future where they are the only masters of their destiny.

Fiddler left her native Ariadna after a clash with the authorities because of her strong activism. She sought shelter in a nomadic trade mission that offered her asylum in exchange for her engineering skills. There, she was able to transform her physical appearance and switch gender, but soon afterwards she felt the need to go further and take her modifications to a whole new level. Fiddler found in Aristeia! the best way to finance the physical changes that made her a lethal fighter on the sand.

Thanks to her Jackbots, Fiddler is a DPS with a touch of control that can be used both offensively (causing damage) and defensively (making it difficult to access the scoring zones).

Gaia is originally from Varuna. From a very early age, Gaia showed off her skills in robotics that led her to be a model student during her formative years. No one was surprised when she was the elected candidate to enjoy a scholarship in NeoTerra. Quite soon afterwards, she managed to draw the attention of the high spheres, who invited her to fight in Aristeia.

Gaia is a controller support that offers her team unprecedented mobility. She can also control her Enemies, hindering or nullifying their ability to move through her Gorgoneions.

In addition, this expansion brings a totally new mechanics for the Controllers and their Minions, their robotic devices that allow them to take their skills to the new level. This also introduces a new way of exercising control over the HexaDome. Fiddler brings the Jackbots; and Gaia, the Gorgoneions.

Coordinator and Aristeia! designer Jesús Fuster expresses it this way “Gaia and Fiddler take control to another level. These two engineers, but especially Gaia, provide a different, totally new mechanic that will create a huge impact among our players.”