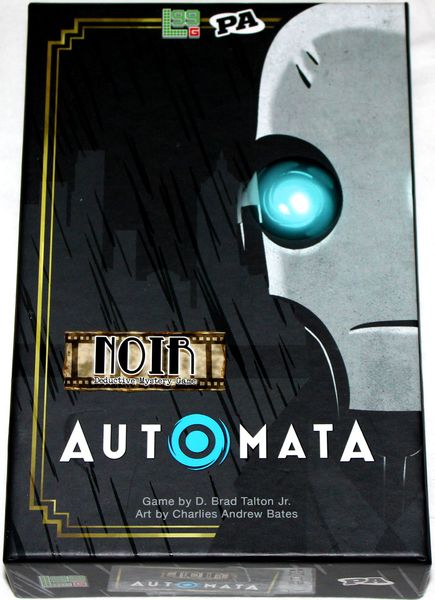 NOIR is a two-player game of hidden identities and deduction. Each player, both Killer and Inspector, receives a secret identity from among 25 suspects and an open role that determines their available moves and victory conditions. The Killer plays by eliminating suspects, focusing more on intuition and reading their opponent; the Inspector uses secret information and their ability to accuse suspects to create a play style more focused around logical elimination of possibilities.

Automata NOIR includes two new game modes — "Buddy Cop" and "Dragnet" — in addition to updated versions of the original "Killer vs. Inspector" game and the "Hitman vs. Sleuth" and "Spy Tag" game modes introduced in NOIR: Deductive Mystery Game – Black Box Edition. The world and characters in Automata NOIR originated in the Automata comic created by Mike Krahulik and Jerry Holkins. The game features the characters Carl Swangee and Sam Regal as well as a host of new and lesser-known faces.

The modes in more detail:
Killer vs. Inspector - The classic hunter-or-hunted game, updated with new rules.

Hitman vs. Sleuth - A more cerebral manhunt, in which the Criminal has specific civilian targets, and the Police Officer has a few new tricks.

Spy Tag - A 3- and 4-player game where players try to score points by capturing rivals.

Buddy Cop - An all new 3-player variant where two Police players work as a team to take on a single Criminal.

Dragnet - A 3- and 4- player deductive game that pits players against one another to solve a conspiracy by connecting suspects.