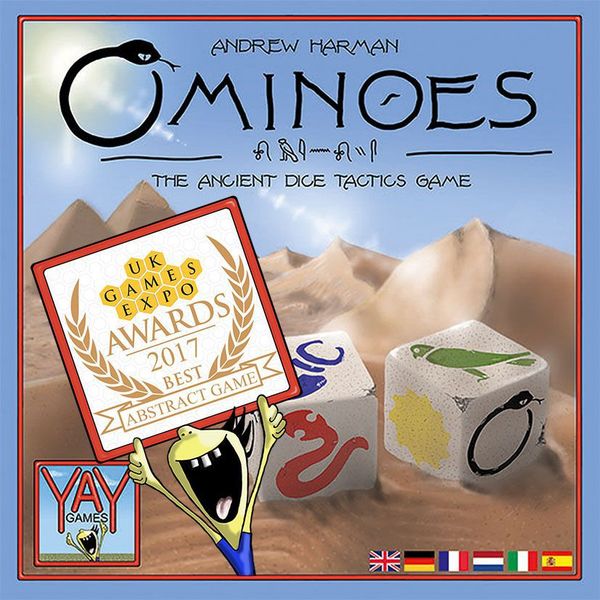 1864, Ominus Valley, Egypt — a hoard of 6,000-year-old game cubes is found. No one knows how to play this mysterious game — until now when this ancient game is reborn as Ominoes.

In this abstract strategy/tactical game, 2-4 players want to collect their favored gods — Horus, Ra, Apep, and Khepri — in groups to earn points. They do this by rolling custom dice that both determine actions and are placed on the game board to count as a piece of the player's color. On a turn, the active player does the following:


Roll: Take a die and roll it.
Move: Move a die on the board that matches the rolled color exactly three spaces.
Place: Placing the die just rolled on the board, possibly scoring a group.


The dice have four faces matching the players colors, with unused colors in a two- or three-player game being scorable by anyone. The other two faces — "Yay-Ra" and "Ominotep" — allow the player to move or reroll any die, respectively, and they count as wild once on the board. Groups of four (or more) dice of a color are scored immediately and give their player points equal to their number. The first player to 13 points (or 21 points in a two-player game)wins!

Quick to learn, easy to play but with layers of light tactics. Ominoes is 15 minutes of play.