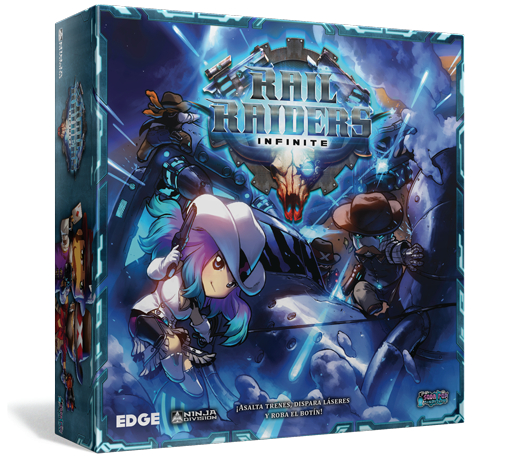 Rail Raiders Infinite is a chibi sci-fi western board game for 2 to 4 players. Raid the Interstellar Express space-rail to earn loot, infamy, and the ire of C.O.W. and the Galactic Central Bank. In order to loot the train you’ll need to first dispose of the meddlesome Tinstar Lawbots, who will do everything in their power to stop your heist. Team up with other Raiders, or do what bandits do best, double-crossing them when their chips are down. Anything goes when you’re out to make a big score!

In Rail Raiders Infinite, players assume control of a bandit raiding the Interstellar Express space-rail. Raiders move from car to car searching for loot. The player who gets the biggest haul of double-dollars before the train makes it to the station wins the game. Combat and other actions are determined by rolling a “hand” of five or more custom poker dice. The player who scores the highest hand wins the roll.

Train Cars, except for the locomotive and caboose, always start the game face down showing the roof side of the car. This way raiders don’t know where the richest opportunities or the most Law Bots are beforehand. When a Raider moves onto, or starts its turn on, a face down car it may turn that car face up. Once a Train Car is turned face up, then Loot tokens are placed on the car and Long Arm of the Law cards are drawn equal to the numbers shown on the car.

Each player takes control of a single Raider. Each Raider has a model and a card with a unique ability which only that Raider may use. A Raider may take three actions during its turn from the following choices: Move, Search, or Showdown. Any action type can only be performed twice during a player’s turn. So while a player gets to take three actions only two of them can be the same type of action.

Poker dice are used to resolve shootouts and other situations within the game. Each die features six values: 10, Jack, Queen, King, Ace, and Joker. Players roll a hand of five dice and then attempt to make the highest poker hand from the results. The player with the highest hand wins!