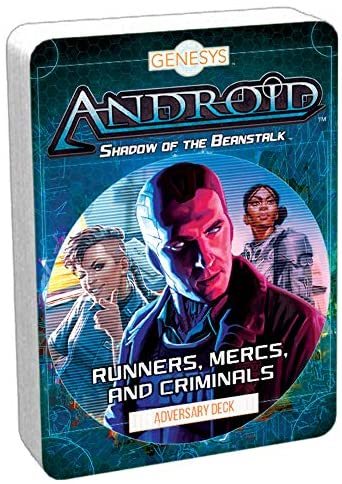 Fantasy Flight Games is proud to present The Runners, Mercs and Criminals Adversary Deck for Shadow of the Beanstalk!

The Runners, Mercs and Criminals Adversary Deck features 20 cards representing powerful adversaries from the Android Universe for use in the Genesys Roleplaying System. These cards feature vital stats for these adversaries, giving Game Masters all the tools they need to keep the game running while introducing new NPC’s into your adventure!

The Runners, Mercs and Criminals Adversary Deck features some of the most famous faces in the Android universe. From Clone Detective Caprice Nisei to NBN Executive Jackson Howard to Rogue Runner Reina Roja, if you want to include individuals who have made their mark in the Android universe in your games, this is the Adversary Deck for you. While some of these adversaries are featured in Shadow of the Beanstalk, others are profiled for the very first time in this deck!