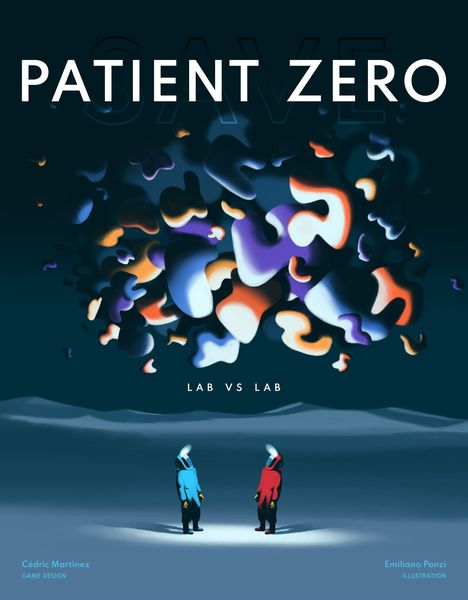 A new pathology has just appeared! Patient Zero has been identified, and it's up to you to find the antidote as soon as possible to save the patient and humanity!

Save Patient Zero pits two labs against each other. Each lab employs one or two scientists (i.e., players), while another player plays a lab computer named Savvy. The labs compete to identify an antidote of three molecules, with the labs typically sharing no information with one another; whichever lab finds the antidote first wins.

The general idea of the game is to use lab tools in the best sequence possible to identify the three molecules out of 25 that make up the antidote. (These 25 molecules are arranged in a 5x5 grid on each lab's worksheet.) At the start of the game, Savvy looks at the top three molecule cards in that deck, then sets them aside. These are the molecules the labs must identify. On a turn, each lab submits a tool card to Savvy to show what they want to do in the round, and whichever lab submits first takes its action first in that round. Actions include:


Each lab has a limited number of actions in its deck — eighteen total, with three Samply, two Dedukto, one Scanpad, two Antidote, etc. — so use them wisely, especially the Antidote because if you fail to identify the correct three molecules a second time, then your lab loses the game automatically.