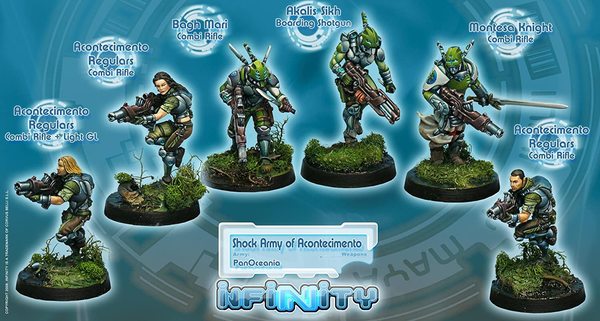 The Shock Army of Acontecimento reflects the vigorous character of this industrial planet’s working population. The troops of Acontecimento are used to winning tactical superiority through sweat and hard work, and to fighting in the stifling thickness of jungles.

This army is a specialized assault force, involved in extremely violent operations against enemy positions, which sometimes develop into close range combat. The operations of the Shock Army are characterized by their dynamic and aggressive tactics. They put out a constant, overwhelming barrage of lethal fire that will not stop until any threat is eliminated and the target conquered.

The Shock Army has some of the best PanOceanian troops, specialized in jungle combat and survival techniques, with an outstanding record during the NeoColonial Wars on the Acontecimento and Paradiso fronts. Therefore, this military force is also assigned to combat operations in jungle environments all over the Sphere.