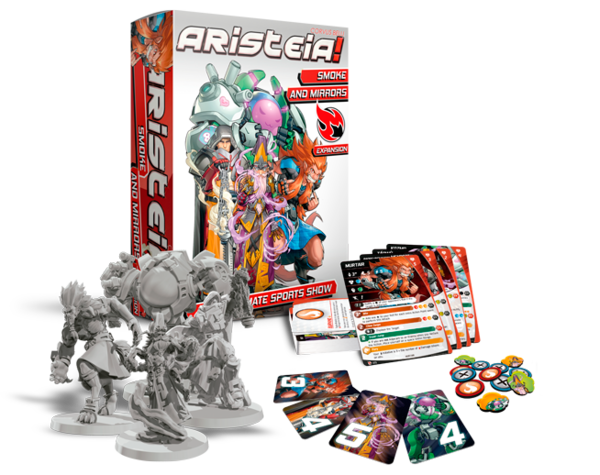 Smoke & Mirrors (SnM) Expansion reminds us that Aristeia! is pure spectacle, a Show for Maya where everything is crafted and treated for the audience’s consumption.

A Father-Inquisitor set to burn heretics, an Eastern Warlock that tortures his enemies with their worst nightmares, a bloodthirsty half-breed Wulver and a smoke throwing robot. Fantastic Characters that will rise the audience levels.

Murtair, Close combat fighter that can use Damage he’s suffered to his own benefit. Offensive profile, given that his Defense is low, and he has no easy way to Disengage (his bloodthirstiness keeps him from leaving the combat).

Kozmo, Support-scorer that protects her team by blocking Line of Sight with her Smoke. Even though she has a very good Defense, she is not a tank.

Padre Inquisidor Mendoza, The Automatic Skill Sanatur a Deo, couple with his Damage capabilities, turn him into an off-tank. If the rival Team has no appropriate counter, he can also work as a tank, because is hard to send him to the Infirmary.

Táowù, Control Support, very aggressive that works mainly with the enemy’s card pool. In addition to that, he is always threating to impose the Immobilized State very easily.

A new type of token that affects the Hexadome Spaces is added:

A new State is added:

Smoke and Mirrors is not a full game. Need a copy of Aristeia! to play.