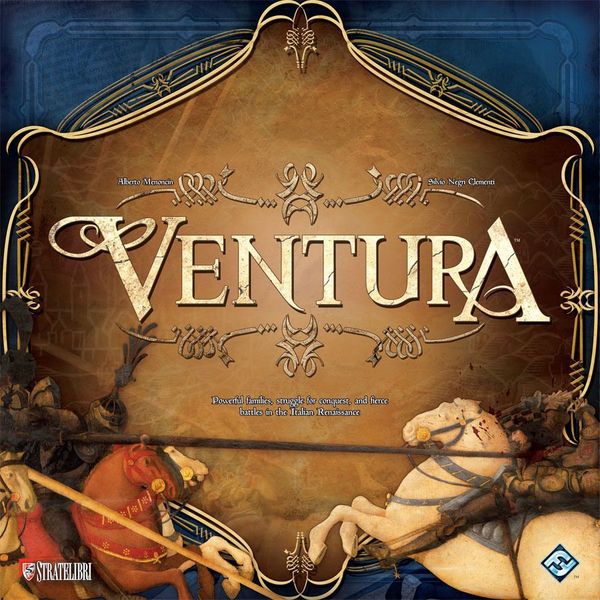 Game description from the publisher:

In an age of great battles, valiant leaders, and unscrupulous mercenary armies, fortune lies within your grasp.

Ventura is a board game of nobility and conquest for 2-4 players. Set in 14th century Italy, Ventura puts players in control of warring noble houses, each vying for control of the country's growing wealth. Balance your house’s earnings and maintain your hired soldiers to keep your family’s noble standing. Remember, the best armies are also the ones that cost the most!

With more than 120 plastic pieces, 40 Territory tiles, 4 Family Boards, a scoring board, and over 100 cards, Ventura will whisk players into a world of warring mercenaries and noble families, all seeking control of Italy’s burgeoning wealth.

But the game is financial as well as military. Because everything in this game costs money. Pay money to draw a card. Pay more money to PLAY a card. And once those troops are in action, you better be prepared to pay them every turn or they'll leave. You can use your money (florins) to buy victory points directly (only 30 to win the game). BUT, that leaves you with precious little funds for your defense. Can your opponent(s) field an army fast enough to take out your capital (for the win) before you get there with money?