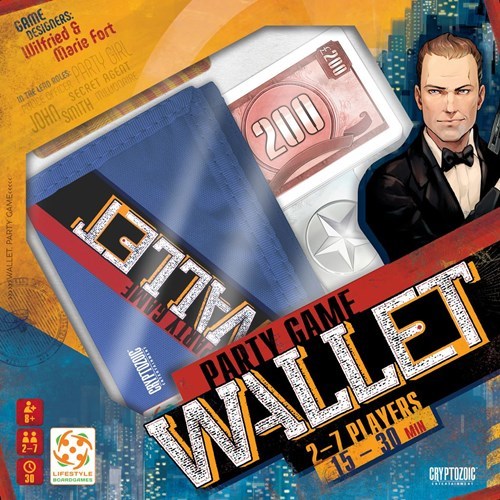 The cops have you surrounded! As your mafia boss escapes into his helicopter, he drops his Wallet, which contains ID cards and wads of currency from around the world. Gameplay consists of a variable number of rounds in which players attempt to locate a plausible ID card and either acquire bribe money or ditch extra currency. Holding multiple IDs and several types of currency will get you locked up for sure. There might even be an undercover cop in your midst, if only he can find a badge!

Feel free to reach into the Wallet...you never know what you'll find. Players may even stash cards there hoping to be rid of them or save them for later. The multiple pockets and zippered areas on the included working-cloth Wallet allow you to bluff your opponents or lead them into traps. Finding special cards will allow you to mess with your opponents' holdings, make unfair trades, or give players unwanted cards! Games last only 10 minutes, and an entire match is over in just 30 minutes. The player who scores the most points after three games is the winner!