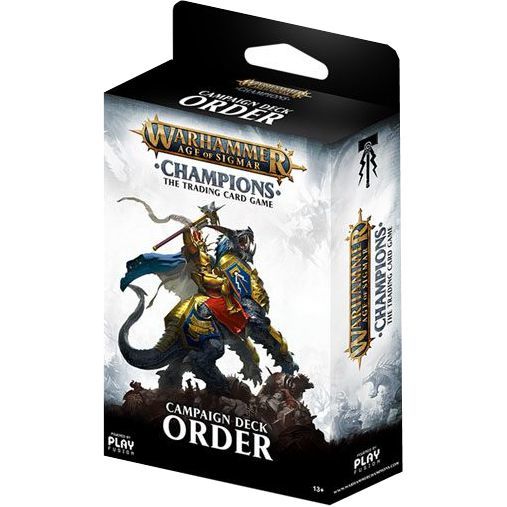 Following the destruction of the original Warhammer world by the forces of Chaos, Sigmar floated aimlessly through space, clutching onto the metal core of the previous world of Warhammer. Long Sigma drifted through space until he was rescued by the great celestial dragon Dracothion, who led Sigmar to the "Mortal Realms". Surviving souls were drawn to these realms but the respite was short lived, as once again the forces of Chaos struck.

Take command of one of four powerful factions and recruit an army of legendary Champions in Warhammer Age of Sigmar: Champions Trading Card Game. Deploy units and unleash deadly magical abilities, while completing quests to earn blessings from the gods. Only the mightiest of warriors will stand victorious in this battle for the Mortal Realms, that spans both physical and digital worlds.

Warhammer Age of Sigmar: Champions includes more than 270 cards split across the four Grand Alliances; Order, Chaos, Destruction and Death; each with their own individual playstyle and strengths.

After choosing their alliance, players begin building their deck. This consists of 38 cards including four legendary Champions, four powerful blessings and 30 action cards consisting of units, spells, and abilities.