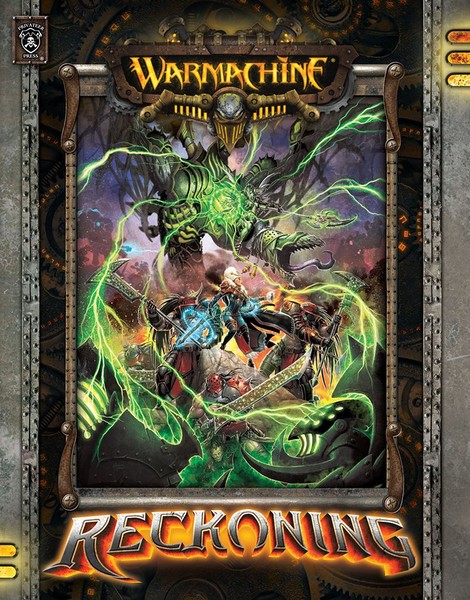 THE KINGDOMS OF HUMANITY STAND AS ONE. Warmachine Reckoning brings you the next thrilling chapter of the Warmachine saga with Reckoning. Fight for survival with this reckoning chapter that bring you:

• New warcasters, including new heroes as well as epic incarnations of some of WARMACHINE’s most feared and revered legends.

•A new generation of colossal's to level the opposition.

•An array of new warjacks, including the personal warjacks of several powerful warcasters.

•New solos to bring a greater range of utility to the battlefield.

•A painting and modelling guide to help you prepare your forces for battle.

•Theme Force lists for each new warcaster, which allow you to create armies based on specialized forces found in the WARMACHINE world.

The rising threat of the Cryxian armies has become too great. Death permeates the war-torn region, and Empress Ayn and King Leto themselves chance incredible danger to meet and coordinate their stand. The Protectorate’s Northern Crusade joins Khador and Cygnar in a final alliance of men against the unending armies of the Dragonfather. As these armies combine to expel the deathless forces of Cryx from the mainland, in tunnels below the battleground a lone Khadoran soldier fights to save one of the Motherland’s greatest legends.

This is a softback cover version of Warmachine Reckoning.