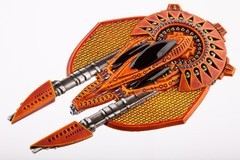 The Warspear is the Shaltari multi-role heavy fighter. Armed with a pair of heavy ion cannons for air targets; and an underslung gauss cannon for ground targets. It is a agile dogfighter, often deployed in an air superiority role.

The Warspear is an all round fighter that works as an interceptor, or as a strike fighter as needed. Normally deployed in small numbers, Warspears hunt alone only in the most epic of battles will you see squadrons flying in formation.

This Blister contains one resin miniature. This model is supplied unpainted, and some preparatory work may be required as well as assembly.