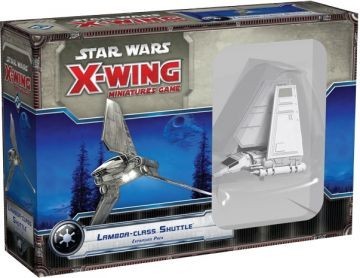 When the X-Wing design team began working with the Lambda-class Shuttle, they knew they wanted to dedicate it to squad-based synergies and skillful piloting. Accordingly, each of the shuttle’s unique pilots comes with an ability that supports his wingmen:

As long as he’s an eligible target, Captain Kagi draws target locks away from more vulnerable ships, like TIE interceptors.

Colonel Jendon helps to establish quick, deadly volleys of missiles, allowing another pilot to spend a target lock and fire the same turn he uses his action to Focus.

Captain Yorr can absorb the stress tokens other ships would take, freeing them up to take actions they might otherwise lose after executing stressful maneuvers like the Koiogran turn.

Additionally, the expansion pack’s twelve upgrades help each of these pilots serve their roles better, and they afford some other tricks as well. Some of these tricks are subtle, such as those permitted by the Intelligence Agent. Others, like those permitted by Darth Vader, are dark, ruthless, and brutal ways to finish off wounded foes.

This Blister contains one plastic miniature. This model is supplied pre-painted and fully assembled.